There was a bit of a complex debate last week over 1Password. I think the best article may be Glenn Fleishman's "AgileBits Isn’t Forcing 1Password Data to Live in the Cloud," but also worth reading are Ken White's "Who moved my cheese, 1Password?," and "Why We Love 1Password Memberships," by 1Password maker AgileBits. I've recommended 1Password in the past, and I'm not sure if I agree with Agilebits that "1Password memberships are... the best way to use 1Password." This post isn't intended to attack anyone, but to try to sort out what's at play.

This is a complex situation, and you'll be shocked, shocked to discover that I think a bit of threat modeling can help. Here's my model of

what we're working on: 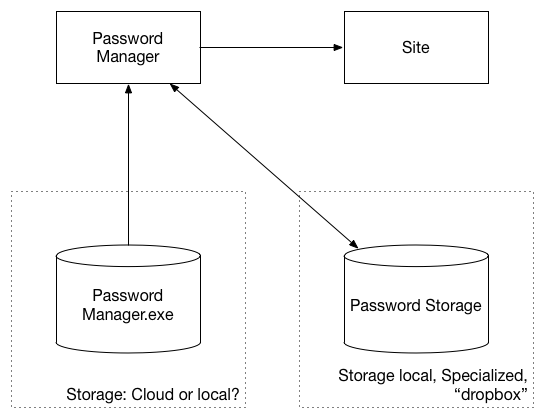 Let me walk you through this: There's a password manager, which talks to a website. Those are in different trust boundaries, but for simplicity, I'm not drawing those boundaries. The two boundaries displayed are where the data and the "password manager.exe" live. Of course, this might not be an exe; it might be a .app, it might be Javascript. Regardless, that code lives somewhere, and where it lives is important. Similarly, the passwords are stored somewhere, and there's a boundary around that.

If password storage is local, there is not a fat target at Agilebits. Even assuming they're stored well (say, 10K iterations of PBKDF2), they're more vulnerable if they're stolen, and they're easier to steal en masse [than] if they're on your computer. (Someone might argue that you, as a home user, are less likely to detect an intruder than Agilebits. That might be true, but that's a way to detect; the first question is how likely is an attacker to break in? They'll succeed against you and they'll succeed against Agilebits, and they'll get a boatload more from breaking into Agilebits. This is not intended as a slam of Agilebits, it's an outgrowth of 'assume breach.') I believe Agilebits has a simpler operation than Dropbox, and fewer skilled staff in security operations than Dropbox. The simpler operation probably means there are fewer usecases, plugins, partners, etc, and means Agilebits is more likely to notice some attacks. To me, this nets out as neutral. Fleishman promises to explain "how AgileBits’s approach to zero-knowledge encryption... may be less risky and less exposed in some ways than using Dropbox to sync vaults." I literally don't see his argument, perhaps it was lost in the complexity of writing a long article? [Update: see also Jeffrey Goldberg's comment about how they encrypt the passwords. I think of what they've done as a very strong mitigation; with a probably reasonable assumption they haven't bolluxed their key generation. See this 1Password Security Design white paper.]

The next issue is where's the code? If the password manager executable is stored on your device, then to replace it, the attacker either needs to compromise your device, or to install new code on it. An attacker who can install new code on your computer wins, which is why secure updates matter so much. An attacker who can't get new code onto your computer must compromise the password store, discussed above. When the code is not on your computer but on a website, then the ease of replacing it goes way up. There's two modes of attack. Either you can break into one of the web server(s) and replace the .js files with new ones, or you can MITM a connection to the site and tamper with the data in transit. As an added bonus, either of those attacks scales. (I'll assume that 1Password uses certificate pinning, but did not chase down where their JS is served.)

Netted out, getting code from a website each time you run is a substantial drop in security.

What should we do about it?

So this is where it gets tricky. There are usability advantages to having passwords everywhere. (Typing a 20 character random password from your phone into something else is painful.) In their blog post, Agilebits lists more usability and reliability wins, and those are not to be scoffed at. There are also important business advantages to subscription revenue, and not losing your passwords to a password manager going out of business is important.

Each 1Password user needs to make a decision about what the right tradeoff is for them. This is made complicated by family and team features. Can little Bobby move your retirement account tables to the cloud for you? Can a manager control where you store a team vault?

This decision is complicated by walls of text descriptions. I wish is that Agilebits would do a better job of crisply and cleanly laying out the choice that their customers can make, and the advantages and disadvantages of each. (I suggest a feature chart like this one as a good form, and the data should also be in each app as you set things up.) That's not to say that Agilebits can't continue to choose and recommend a default.

After years of working in these forms, I think it's helpful as a way to break out these issues. I'm curious: does it help you? If not, where could it be better?