Polymorphic Warnings On My Mind 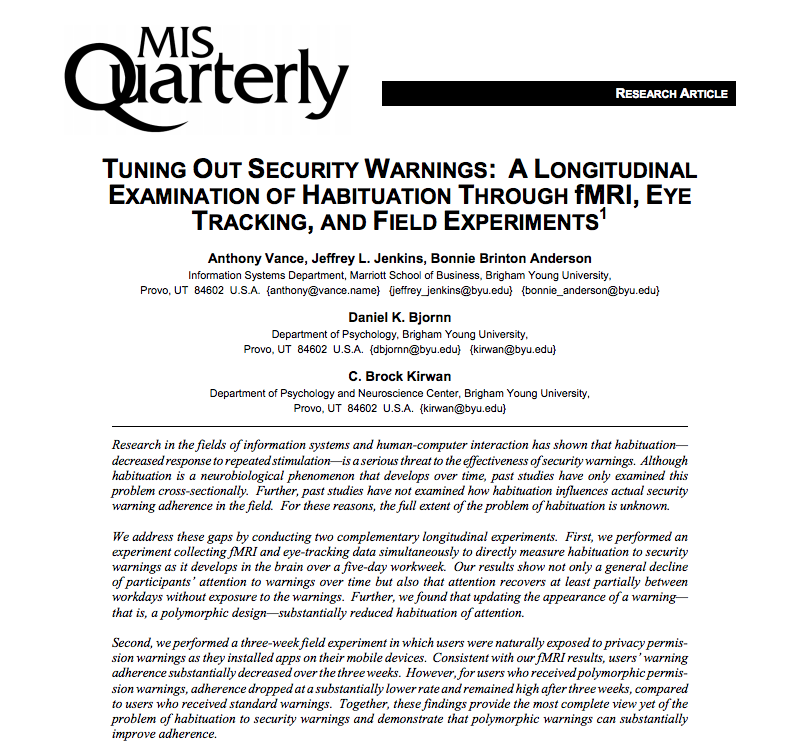 There's a fascinating paper, "Tuning Out Security Warnings: A Longitudinal Examination Of Habituation Through Fmri, Eye Tracking, And Field Experiments." (It came out about a year ago.)

The researchers examined what happens in people's brains when they look at warnings, and they found that:

Research in the fields of information systems and human-computer interaction has shown that habituation—decreased response to repeated stimulation—is a serious threat to the effectiveness of security warnings. Although habituation is a neurobiological phenomenon that develops over time, past studies have only examined this problem cross-sectionally. Further, past studies have not examined how habituation influences actual security warning adherence in the field. For these reasons, the full extent of the problem of habituation is unknown.

We address these gaps by conducting two complementary longitudinal experiments. First, we performed an experiment collecting fMRI and eye-tracking data simultaneously to directly measure habituation to security warnings as it develops in the brain over a five-day workweek. Our results show not only a general decline of participants’ attention to warnings over time but also that attention recovers at least partially between workdays without exposure to the warnings. Further, we found that updating the appearance of a warning—that is, a polymorphic design—substantially reduced habituation of attention.

Second, we performed a three-week field experiment in which users were naturally exposed to privacy permission warnings as they installed apps on their mobile devices. Consistent with our fMRI results, users’ warning adherence substantially decreased over the three weeks. However, for users who received polymorphic permission warnings, adherence dropped at a substantially lower rate and remained high after three weeks, compared to users who received standard warnings. Together, these findings provide the most complete view yet of the problem of habituation to security warnings and demonstrate that polymorphic warnings can substantially improve adherence.

It's not short, but it's not hard reading. Worthwhile if you care about usable security.