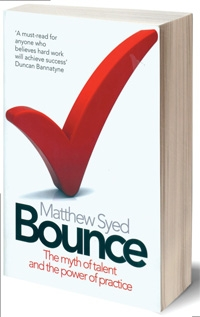 I want to talk about two books: Bounce, by Matthew Syed and Range, by David Epstein. I want to talk about them together in part because Range is explicitly framed as a response to Bounce. [Update: Bill Gates has selected Range as one of his 5 good books for a lousy year.]

Bounce is focused on the relationship between talent and training. Syed starts with a discussion of ping pong stars, and the belief that they have some special talent or affinity for the game. He points out that most of Britian's Olympic team came from the same town, and how unlikely it is that everyone in that town had some genetic or other inbuilt advantage. It's about training and practice. Not the junk-science of 10,000 hours of practice, but the use of deliberative practice to develop specific skills.

This is resonant because I've spent a long time arguing against the need for an attacker mindset, or 'think like an attacker.' If we require some special, unteachable mindset as a prerequisite to building secure systems, we might as well give up. But, as Bounce teaches us, there's no magic, just practice. (Affinity for a topic, enjoyment of the practice doubtless helps, and early success probably contributes to that enjoyment, and thus practice.)

And that practice needs to be deliberate. That is, it needs to focus in on weaknesses, and address them. The exercises need to be constructed to develop new skills. I took a lot from this book to revising the training I deliver in threat modeling.

Of course, when I say this is resonant, I'm at risk of letting confirmation bias dominate my perception, and so it's good to have Range to critique Bounce. Epstien constructs a powerful argument that much success comes from acting at the intersection of fields or ideas, and that if you specialize early to get to thousands of hours of deliberative practice, you won't have range to draw apon.

This is interesting because in my time in security, we've gone from a field in which no one was trained, degreed or certified to one in which those are essential to starting out. We've struggled through the first attempts to figure out what security is, why it matters to an organization, how to "do security", "measure security" and reward employees for their work. We have answers, and to address demands from executives, IT departments, developers, and others, we've created structures and roles that define how work gets done. We now teach people how to be a SOC operator, a threat hunter, a penetration tester, an IAM manager, etc.

There is strong resistance to these forms, because a little reflection shows that these organizations are neither natural nor effective. There's a move recently to cast aside security's hard-won right to stop shipment. It turns out that being able to stop ship comes with accountability without authority, and so product owners pressure security to sign off, despite having done no work to secure a product. It's a bad situation all around, and the solution, shockingly, is to give up the power to stop a product from shipping, and move to an advisory role.

We have, probably, the same number of people with 'non-standard' origin or training as we did twenty years ago, but the field is far larger, making such difference far less common as a fraction of practitioners. We have fewer conversations about how we set our goals or why we do things, and a lot more about the tasks and how to accomplish them.

I learned important things from Range, and it delivers value. At the same time, I think it critiques an argument that I didn't read in Bounce. That argument is 'specialize early.' That's certainly an argument that's out there. There are regular complaints that people coming out of school don't have the particular technical skills that employers want, and that's frustrating to employers and students. What are they paying for if not to learn? And what they need to learn are not how to use Nessus version 2.2, but how to think critically, how to communicate, and how to learn. They need the range in which to embed their skills.

Below are some highlights that caught my attention in Range. I read Bounce on paper, so adding quotes is harder.

You think shipping takes you a long time?

Our next open course is in just a few weeks!