We can learn from bad examples and how they can be corrected.  Case in point:  the newly released SANS “Top Cyber Security Risks” report .  Here’s the first graphic in the report: 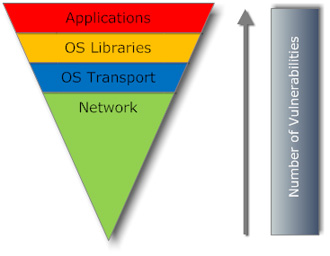 (I imagine that this graphic was created by a professional designer based on some simple sketch or even just notes from an expert.  I assume that the designer picked all the colors and shapes.  Pretty, isn’t it?)

I puzzled over this graphic for almost 15 minutes before I was confident I knew what it was trying to communicate.

I created this alternative graphic to communicate the same message more clearly:

This simple graphic expresses the essential message that “total vulnerabilities” is the sum of each of the components.  That is the whole message – nothing more.  Topologically, it’s basically a Venn diagram.  Because the individual boxes are not quite touching, there is less chance for the reader to assume that the box size (or shape) matters in any quantitative sense.  You aren’t visually adding them up in any direction, and therefore you don’t need any axis or axis label.

OK. This graphic isn’t as pretty as the one above, but at least it’s clean and the meaning is very apparent.  There’s little room for misinterpretation.

The bigger question is why would this piece of information merit a graphic in the first place?  Wouldn’t a sentence with a bulleted list work just as well?  I think it would.  Thus, this is another case of graphics overkill.

Moral of this story:  don’t simply hand your graphics to a designer with the instructions to “make this pretty”.   Yes, the resulting graphic may be pretty, but it may lose its essential meaning or it might just be more confusing than enlightening.  Someone has to take responsibility for picking the right visualization metaphor and structures.