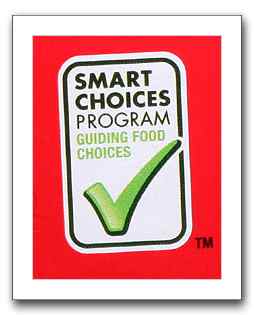 He said the criteria used by the Smart Choices™ Program™ were seriously flawed, allowing less healthy products, like sweet cereals and heavily salted packaged meals, to win its seal of approval. “It’s a blatant failure of this system and it makes it, I’m afraid, not credible,” Mr. Willett said.

[…]
Eileen T. Kennedy, president of the Smart Choices™ board and the dean of the Friedman School of Nutrition Science and Policy at Tufts University, said the program’s criteria were based on government dietary guidelines and widely accepted nutritional standards.

She said the program was also influenced by research into consumer behavior. That research showed that, while shoppers wanted more information, they did not want to hear negative messages or feel their choices were being dictated to them.
“The checkmark means the food item is a ‘better for you’ product, as opposed to having an x on it saying ‘Don’t eat this,’ ” Dr. Kennedy said. “Consumers are smart enough to deduce that if it doesn’t have the checkmark, by implication it’s not a ‘better for you’ product. They want to have a choice. They don’t want to be told ‘You must do this.’ ” (“For Your Health, Froot Loops™“)

Yes, every single one of these is a better choice than a petri dish full of salmonella. Guaranteed, or your money back.

I’ve added ™ marks where I think the New York Times™ should have included them.

4 comments on "Make the Smart Choice: Ignore This Label"