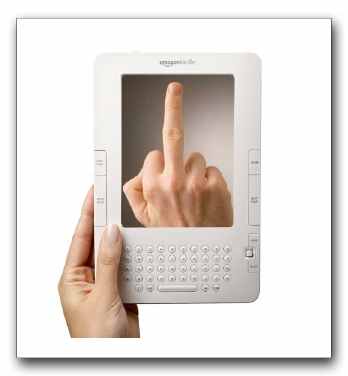 Well, by now it’s all over the blogo/twitter spheres, and everything that might be said has already been said about Eric Blair, a publisher and Amazon:

This morning, hundreds of Amazon Kindle owners awoke to discover that books by a certain famous author had mysteriously disappeared from their e-book readers. These were books that they had bought and paid for—thought they owned.

But no, apparently the publisher changed its mind about offering an electronic edition, and apparently Amazon, whose business lives and dies by publisher happiness, caved. It electronically deleted all books by this author from people’s Kindles and credited their accounts for the price. [Update: This is misleading, see “We Regret The New York Times’ Error“]

This is ugly for all kinds of reasons. Amazon says that this sort of thing is “rare,” but that it can happen at all is unsettling; we’ve been taught to believe that e-books are, you know, just like books, only better. Already, we’ve learned that they’re not really like books, in that once we’re finished reading them, we can’t resell or even donate them. But now we learn that all sales may not even be final. (“Some E-Books Are More Equal Than Others,” David Pogue, New York Times.)

Jack Balkin has some interesting commentary in “Control at a Distance:”

This is because of the combination of the first sale doctrine in copyright law and the fact that the book is a physical copy. Because it is a physical copy, nobody would think that the publisher of the book would have the rights to enter your house and remove the book. But when you purchase an e-book, what you really purchase is merely a license to store the an electronic copy on the Kindle’s hard drive according to end user license agreement that Amazon provides (and that you agree to when you purchase and first use the device). As a result you may not have the rights to do things with the e-book that you think you can.

For example, you may not have the right to read or write code like “MobiDeDRM.zip.” You probably have a right to read English about it in places like “Converting Kindle Books: a painful process that works for reading Kindle books without a Kindle.” I probably have the right to tell you that this will give you advice to type sentences like python mobidedrm.py Title-of-Book.azw Title-of-Book.mobi (your kindle serial number> (which is just an imperative form verb, a noun and three adjectives.) That sentence is incredibly expressive, and even emotionally evocative to any Kindle owner who is upset over what Amazon has done [link to http://www.amazon.com/tag/kindle/forum/ref=cm_cd_pg_newest?_encoding=UTF8&cdForum=Fx1D7SY3BVSESG&cdPage=1&cdSort=oldest&cdThread=Tx1QUP1NLUY4Q5M&displayType=tagsDetail no longer works], and who takes the time to think through what the sentence means. It means that the boot can be removed from the device.

Back in the days of the crypto wars, we had the ITAR regulations which treated crypto like a munition, and helped keep the internet insecure against wiretappers. (The knock-on effects of the ITARs probably substantially enabled the Iranian government’s monitoring of internet traffic, as standards stay deployed for a long time, and the 3G phone standards were written in a world where crypto was radioactive.)

Back to the ITAR, people like Phil Karn and John Gilmore printed some crypto software and applied for an export license for the printed form, and the same software on a disk. Obviously, the paper form was covered by the first amendment, and to restrict something based on form was silly and ineffectual. Confronted with that, the NSA went back to the drawing board and revised their regulations. I’m hopeful that this “Memory Hole 2.0” that Amazon has just demonstrated to the world will draw attention to the DMCA and its provisions which prohibit people from speaking certain sentences which cause ‘technological protection measures’ to be bypassed. Those sentences might be powerful, but they’re really little different from other sentences you might write in languages which you didn’t learn growing up. Written words have long been powerful. The pen is mightier than the sword, and all that.

Amazon is between a rock and a publisher here. They need the cooperation of publishers to get most any content created in the last 70 years onto the Kindle. They know consumers who discover book removal hate it. But I think they’ve chosen a sub-optimal position between that rock and publisher. I don’t believe they need the ability to reach out into Kindles and change things. They should treat that as a bug and fix it.

The alternative would be that consumers fix it themselves, and who knows what else they might do with the Kindles they’ve purchased? Folders? A private PDF reader? Chaos might emerge.

Oh, the very best part? The books in question? The ones that went down the memory hole? Blair wrote them under a pen name, George Orwell. And the books? Animal Farm and 1984.

Some additional links which I think are worth reading:

2 comments on "Kindling a Consumer Revolt"