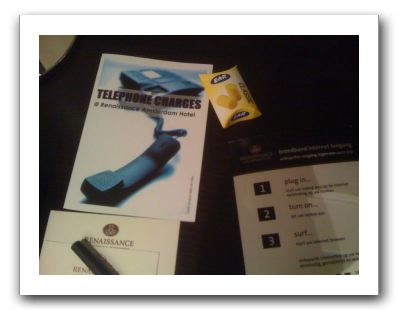 The night of September 29th, I had a room at the Renaissance Amsterdam hotel on Kattengat street. Actually I had two rooms, not that I slept in either of them. The first had too much street noise, and windows that didn’t block out the sound. The second, well, I woke up at 7.30 AM from construction noise inside the hotel.

I want to be clear: this was not construction near the hotel, this was work being done on the hotel itself. In other words, management had made the call that starting construction at 7.30 in the morning was ok.

After 4 emails, first to my travel agency, then to the Marriott guest experience manager, then twice with Horst Wittrich, the hotel manager, they have failed to satisfy my request to have my bill cancelled, much like my sleep was cancelled.

Over those 4 emails, they offered me 30,000 Marriott points (roughly a one night stay at one of their hotels) and a 50% reduction in the billed rate for the room. They apparently didn’t care about my satisfaction when they decided to have construction come in at 7.30 AM, and they have failed to ask once “would this satisfy you?” when emailing back and forth.

I suppose I could continue to state and re-state my request, but it is obvious that their management doesn’t care about customer satisfaction.

So do yourself a favor: stay anywhere else. And while we’re being all consumerist: read Halvar’s story before buying a Volkswagen.

Photo: earplugs provided by the management of the Renaissance Amsterdam hotel. (I’d meant to post this a few weeks ago.)

8 comments on "Don’t Stay at the Renaissance Amsterdam Hotel"