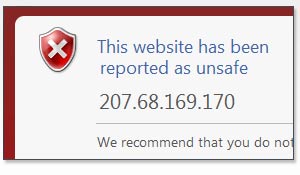 RFC 1918 is a best-current-practicies RFC that describes network address ranges that we all agree we won’t use globally. They get used for private networks, NAT ranges and so on. There are three ranges:

They are thus the Internet equivalent of the American phone system not using the exchange 555, only more useful. If you need to give an example IP address, you can use one of those without causing anyone consternation or irritation.

An example of why you want to use one of these addresses can be found (at least for the next few minutes) at Microsoft’s site for the IE 8 beta [link to http://www.microsoft.com/windows/internet-explorer/beta/ no longer works]. One of the IE 8 features is the “SmartScreen Filter” [link to http://www.microsoft.com/windows/internet-explorer/beta/features/stay-safer-online.aspx no longer works] which can tell you IP addresses you’re best not going to. An example is the picture accompanying my post.

I suppose that using one of your own addresses as a hazardous address is better than using someone else’s, but immature people like Your Friendly Author will titter over it and point it out to other people as well.

There’s a reason RFC 1918 exists, and this is one of them. Oh, by the way, be sure to look at RFC 2606, which reserves the domains example.com, example.net, and example.org. It also reserves the top-level domains .test, .example, .invalid, and .localhost. Remember them.