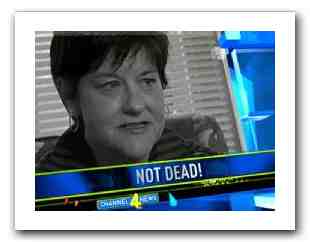 Dan Solove has an interesting article up, “Coming Back from the Dead.” [link to http://www.concurringopinions.com/archives/2008/02/coming_back_fro.html no longer works] It’s about people who are marked dead by the Social Security Administration and the living hell their lives become:

According to government paperwork, Laura Todd has been dead off and on for eight years, and Todd said there’s no end to the complications the situation creates.

According to a government audit, Social Security had to resurrect more than 23,000 people in a period of less than two years. The number is the approximate equivalent to the population of Brentwood.

Illinois resident Jay Liebenow was also declared dead. He said Todd is now more vulnerable to identity theft because after someone dies, Social Security releases that person’s personal information on computer discs. He said the information is sold to anyone who wants it, like the Web site Ancestry.com.

Responsibility should be placed on every entity that maintains records to ensure that information is correct and that errors are promptly fixed. Moreover, when information is shared with others, the one sharing the information should have duties to inform the others of the error; and those receiving the data should have a duty to check for corrections in the data from the source.

I’d propose a different solution: libel law. These organizations are making false and defamatory statements about people. They should be held accountable, under existing law.

I’ve been discussing libel and the credit agencies for years, in posts like “Because That’s Where The Money is: Ethan Leib’s ID Theft” or “ Government Issued Data and Privacy Law.” I’ve yet to hear why libel law isn’t a reasonable and easy approach to the problem. As Nick Szabo comments in “The Discovery of Law,” “common law is a painstaking way of discovering and making better law, case by case, dispute by dispute, piece of evidence by piece of evidence.”” I’m not calling for a broad overhaul. I think that a common law approach to libel law would likely address many of our issues with the way data flows between organizations.

4 comments on "Not Dead Yet"