According to the CBC: “McDonald’s kale salad has more calories than a Double Big Mac” 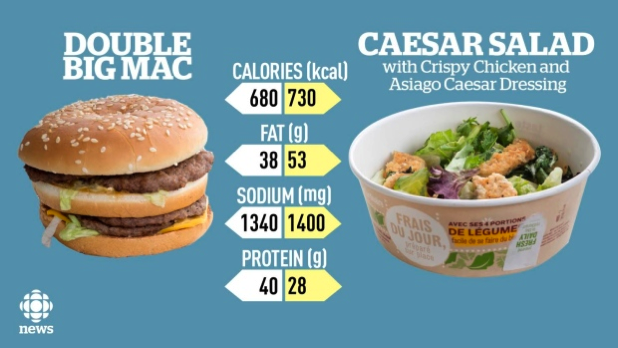 In a quest to reinvent its image, McDonald’s is on a health kick. But some of its nutrient-enhanced meals are actually comparable to junk food, say some health experts.

One of new kale salads has more calories, fat and sodium than a Double Big Mac.

Apparently, McDonalds is there not to braise kale, but to bury it in cheese and mayonnaise. And while that’s likely mighty tasty, it’s not healthy.

At a short-term level, this looks like good product management. Execs want salads on the menu? Someone’s being measured on sales of new salads, and loading them up with tasty, tasty fats. It’s effective at associating a desirable property of salad with the product.

Longer term, not so much. It breeds cynicism. It undercuts the ability of McDonalds to ever change its image, or to convince people that its food might be a healthy choice.