NASA claims [link to http://saturn.jpl.nasa.gov/photos/imagedetails/index.cfm?imageId=4152 no longer works] that:

At least four distinct plumes of water ice spew out from the south polar region of Saturn’s moon Enceladus in this dramatically illuminated image.

Light reflected off Saturn is illuminating the surface of the moon while the sun, almost directly behind Enceladus, is backlighting the plumes. See Bursting at the Seams [link http://saturn.jpl.nasa.gov/photos/imagedetails/index.cfm?imageId=3852 no longer works] to learn more about Enceladus and its plumes. 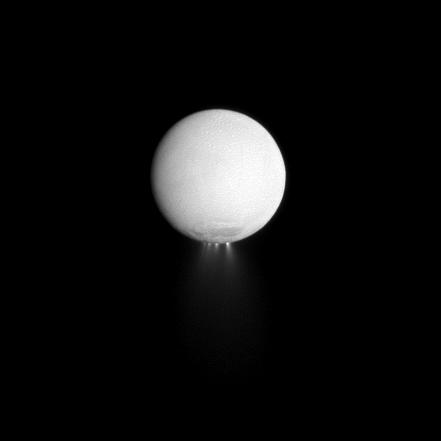 But they can’t fool me. That’s no moon, that’s a battle station.