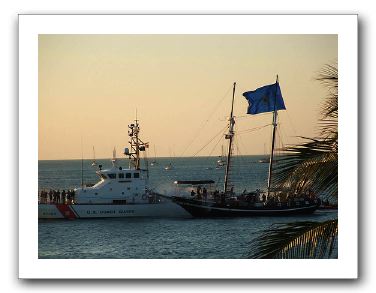 Apparently, in a sovereign-in-cheeck move, the the Florida Keys have withdrawn from the United States, and declared themselves to be “The Conch Republic.” Their motto is “We seceded where others failed.” Perhaps you haven’t heard of them because they make all the good jokes, making writing about them hard.

I heard about them because of an incident that was mentioned in this podcast. The United States will allow Cuban refugees to enter if they reach dry land. The Border Patrol declared that 15 Cuban refugees that had reached the bridge were not in the United States, and thus could be returned to Cuba. Based on this disavowal, the Conch Republic seized the bridge and declared it their territory, in what is now known as “The great invasion of 1995.” [link to http://www.conchrepublic.com/invade95.htm no longer works]

Next time I need a good vacation in the sun, I know where I’m going.