One Nation Under CCTV 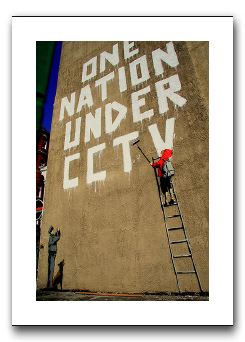 Banksy has done a wonderful service. The well-known artist has given us delightful commentary on surveillance.

Better than that, he did it in a site above a Post Office yard in London (Newman Street, near Oxford Circus), behind a security fence and under surveillance by CCTV. His team erected three stories of scaffolding on Saturday, did their work, and removed the scaffolding on Sunday.

The Daily Mail has photos that include the CCTVs overlooking the work.